Once upon a time, there was a king

That no longer wanted to be a king.

Metamorphase is a mobile puzzle game and an adventre across bridges (as today, there is only a prototype).

The player follows a succession of scenes in which a broken bridge prevents a character to reach the other side.

The player can manipulate the camera angle until finding the perspective from which the bridge seems to be rebuilt, which instantly rebuilds it.

Through multiple chapters, the player will then assist a King in search of individuality.

This concept is born during the listening of Steven Reich’s Piano Phase  (video and score below).

Gradually, one of the instruments accelerates and goes rythmically out of sync with the other one … until it’s synchronised again, but moved one note forward.

The piece carries on with the two instruments continuously alternating between a feeling of chaos when they are out of sync, and of order when they are synchronised.

Metamorphase is based on this alternance and on the research of order from chaos. An object, apparently fragmented, is suddently rebuilt in a new form. 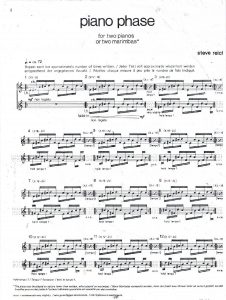 I then created a concept in which a character goes on a journey and crosses a series of bridges. However, each bridge is fragmented in multiple pieces : the player must rebuilt it in order for the character to continue its way.

To justify the character’s journey, I imagined a story in which a king, tired to assume a function he hasn’t chosen, flees from its castle and goes in quest of individuality.

This narrative layer allows me to bring a deeper meaning in the game. Each location metaphorically represents a step on the character’s internal quest, and the bridges are the challenges he needs to overcome to continue his quest. 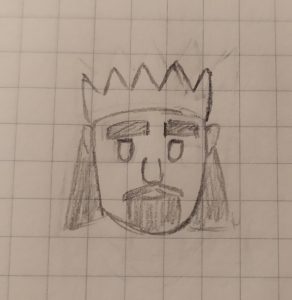 The Level Design has the role to freshen the game’s experience, but also to support the narration by linking the mechanics to the story.

For example, in chapter 3, the character is scared by an outside storm (which represents its fear of going out of the castle). If the player brings the camera too close to certain noticeable locations, a lightning strikes and randomly changes the camera angle.

The goal of this mechanic is to reinforce the character’s fear by making the player avoid the lightnings. He must move the camera carefully !

About the music, it will be unique for each level and divided into two part : when the bridge is still fragmented, it’s like a free improvisation without any clear rythmic pulse.

However, it gains a short and precise rythmic motive as soon as the bridge is rebuilt, as if the previous music was “in order” again. This design support the chaos and order phases which give rythm to the game.